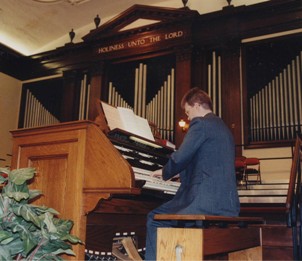 At the 2004 Asbury College Alumni Reunion, the college family commemorated the 75th anniversary of Hughes Auditorium. Throughout the years it has been a place of worship with profound meaning to members of the Asbury College community. One of the special aspects of Hughes is the great music that has filled its walls through the decades. The centerpiece of much of the great music offered in Hughes has always been the organ.

There have actually been five organs known to exist in Hughes Auditorium since it opened in 1929. Only the existing organ, which was built in 1975, has survived.

Dr. Lewis Robeson Akers was president of Asbury College at the time Hughes Auditorium was built. While speaking at the Ocean Grove Campmeeting in New Jersey, Akers shared the new chapel and the need for building funds. One of the camp attendees, Mrs. James Magee, pledged to cover the full cost of a new pipe organ in memory of her son, Stanley Vernon Magee, who had died during World War I.

The organ was ordered from the highly regarded Austin Organ Company of Hartford, Connecticut, at the cost of $28,000. It was to be an 18,000-pound instrument with a four-manual console and 56 ranks. The organ was completed in time for the dedication of the auditorium in June 1929 where a dedicatory recital was offered by Albert Ramenschneider of Cleveland, Ohio. At the time, the Hughes Auditorium organ was the largest in the south-central United States.

Mrs. Era Wilder Peniston, the professor of organ at Asbury, raised funds to purchase two additional practice organs for the organ students, organ music being the newest major offered. One practice organ was installed at the top of the stairwell in the southwest corner of the building and the other was placed in a room on the main floor of the auditorium just to the right of the main organ. A third practice organ, a small Hammond electronic, was placed in the lower level of the southeast stairwell for a brief time in the 1950’s.

In 1966 the Austin organ was re-leathered and cleaned to extend its life, but within a few years, its condition was quickly deteriorating with many dead notes and non-working stops. The last time the old organ was played publically was for Commencement in 1975. That summer the organ was rebuilt by Austin technicians into the present instrument having a three-manual console and 50 ranks. The cost of the project was $75,000.

On May 26, 1981, the organ was rededicated and renamed “The Magee-Peniston Organ,” in honor of Mrs. Magee who donated the money for the original organ and Mrs. Peniston who taught organ at Asbury for 38 years.

The organ was damaged in 1990 during the construction of Reasoner hall, which joined Hughes Auditorium and Morrison Hall. The chimes fell from the back wall of the organ chamber and crushed several dozen pipes. The physical damage was not all that the organ suffered. The visible pipes make up only a small part of the organ pipes – there are over two thousand more wood and metal pipes that are hidden from view. Each of those two thousand plus pipes had to be removed and cleaned inside and out by hand because dirt from the construction entered the organ chamber. After approximately $25,000 in repairs, the organ returned to permanent use in February 1992.