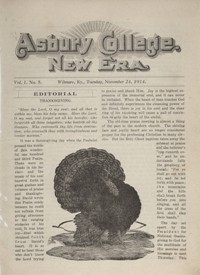 In the early years of Asbury College, there were some sporadic student publications, but on September 29, 1914, a regular student newspaper, called the New Era, was started. There are no known surviving copies of the first three issues of the New Era, but the Asbury University Archives has the subsequent issues in its collection. The New Era featured ten pages of campus news and announcements, reports from the various clubs and societies on campus, and a briefing on intramural athletics.

In 1925 Asbury graduate E. Stanley Jones, at that time a well-known missionary to India, suggested that the student newspaper adopt a new name. The paper’s editor-in-chief, Z.T. Johnson, who would later serve as president of Asbury College, encouraged the student body to submit suggestions for a new name for the paper. The entry of Collegian was unanimously approved by a faculty committee, and the Collegian has been in publication ever since. In 1956 the Associated Collegian Press (ACP) named the Collegian an “All-American” student publication. 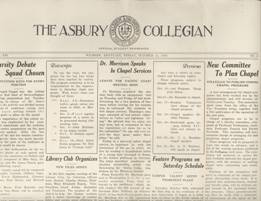 Several measures are taken every year by the Asbury University Archives to ensure the preservation of the Collegian. Two copies of each issue are filed in acid-free folders and stored in archival-quality boxes. Another copy is sent, along with the other issues for that academic year, to the bindery to be bound in a hardcover. Every eight years or so another copy of each issue is sent to the University of Kentucky to be microfilmed.

Several years ago the staff of the Asbury Archives began a project to index every article that has appeared in the Collegian and the New Era. This indexing allows Archives staff to find articles for research questions by title, author, date, and subject, and also allows them to see if the article had an accompanying photograph. All of the index records are stored on a single Microsoft Access database. Every academic year staff members work diligently about 8 hours a week on this project, indexing the current year’s Collegians as well as older issues.

Printed subject indexes are now available to the public in the Archives Reading Room to help users locate articles published between 1945 and 2011.  During 2013 Asbury University Archives began an ambitious project to digitize historical copies of The Collegian.  The first phase includes issues from February 1925 through the end of the 1939-40 academic year.  Those issues can be viewed online, full-text.