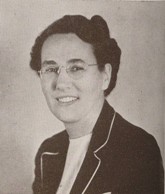 Rosalind Rinker (1906-2002) Rosalind Beatrice Rinker was born April 2, 1906, in New Rockford, North Dakota. Converted at the age of 15, Rinker sailed to China at the age of 20 to work for the Oriental Mission Society (now OMS International). She served in China for 14 years as a secretary, teacher, and evangelist.

As the political climate in China got dangerous, Rinker came back to the U.S. and enrolled at Asbury College in Wilmore, Kentucky. Upon graduating in 1945, she began working as a staff counselor for InterVarsity Christian Fellowship. She worked three years in New York City and eleven years in the Pacific Northwest.

Rinker wrote extensively, which resulted in many speaking engagements. Many of these engagements were workshops based on her well-known book, Prayer: Conversing with God, which taught Christians about the art of conversational prayer.

In October 2006, Christianity Today Magazine published its list of “The Top 50 Books That Have Shaped Evangelicals” (over the past 50 years). Rinker’s Prayer: Conversing with God was voted number one on that list by CT‘s editors. The magazine had this to say: “In the 1950s, evangelical prayer was characterized by Elizabethan ‘wouldsts’ and ‘shouldsts’. Prayer meetings were often little more than a series of formal prayer speeches. Then Rosalind Rinker taught us something revolutionary: Prayer is a conversation with God. The idea took hold, sometimes too much (e.g., ‘Lord, we just really wanna…’). But today evangelicals assume that casual, colloquial, intimate prayer is the most authentic way to pray.”