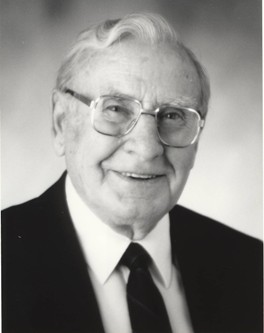 Cornelius R. Hager (1913-2007) C.R. Hager was born July 12, 1913, in Jessamine County, Kentucky. He attended Asbury College, graduating in 1934 with degrees in Biology and Greek. He received a Bachelor of Divinity from Asbury Theological Seminary in 1938, a masters’ degree from the University of Kentucky in 1941, and a doctor of divinity from Asbury Theological Seminary in 1963. He also did graduate work at the University of Chicago and Columbia University.

Dr. Hager’s record of service to Asbury College and the greater central Kentucky area is impressive. Following his graduation from Asbury College, he was a teacher and principal in Nicholasville schools from 1935-1938. He was a liaison officer for the Kentucky Department of Welfare from 1938-1942. During World War II Hager served two years in the South Pacific as an Army transport commander. During his four-year military career, he rose to the rank of Major. He also served as a Veterans Administration counselor.

Hager then went on to serve as an administrator at the University of Kentucky from 1957-1979 (with the exception of years he served as Asbury College’s interim president.) While at UK, Hager was instrumental in the development of the school’s extension centers, which enabled people from around the state to take college-level courses at satellite locations. Hager spent time as assistant dean of the extension program. He cared for educational opportunities for all ages as director of the university’s Council on Aging and director of the Head Start program.

Hager was also very involved in his local community. He was a Boy Scout leader. He co-founded the local Little League and Babe Ruth baseball leagues. He was a member of the public library board, the Jessamine County 4-H Council, and the Jessamine County Fair board. He was once named Jessamine County Citizen of the Year by the Chamber of Commerce and was inducted into the chamber’s Hall of Fame. He was also instrumental in the creation of the Wesley Village retirement community in Wilmore.

Perhaps no one person has provided more diverse and timely service to Asbury College than Dr. C.R. Hager.