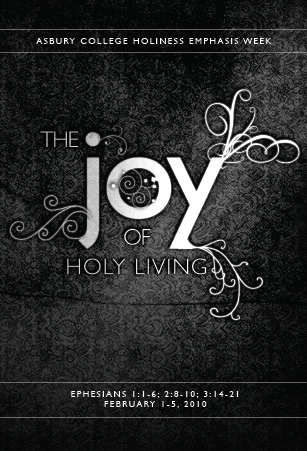 Doctrinal Statement: “Entire Sanctification is that act of divine grace, through the baptism with the Holy Ghost, by which the heart is cleansed from all sin and filled with the pure love of God. It is a definite, instantaneous work of grace, wrought in the heart of a believer through faith in the cleaning merits of the blood of Jesus Christ, subsequent to regeneration, and is attested by the Holy Spirit.”

Dr. John Oswalt, a native of Mansfield, Ohio, is the Visiting Distinguished Professor of Old Testament at Asbury Theological Seminary. He returned to his alma mater in July 2009 after ten years teaching at Wesley Biblical Seminary in Jackson, Mississippi. Prior to that he was Professor of Old Testament and Semitic Languages at ATS from 1989-1999, which was his second term on that faculty, having first served from 1970 through 1982. In the interim he was President of Asbury College (1983-1986) and a member of the faculty of Trinity Evangelical Divinity School, Deerfield, Illinois (1986-1989). He is married to the former Karen Kennedy, and they have three children and two grandchildren. Dr. Oswalt holds degrees from Taylor University, Upland, Indiana; Asbury Theological Seminary; and Brandeis University, Waltham, Massachusetts. From Brandeis he received the Ph.D. in Mediterranean Studies. His particular interest is in Old Testament studies with special attention to the Hebrew language and to the formation of Hebrew religion against the background of the ancient Near East. Dr. Oswalt’s writings have appeared in Bible encyclopedias, scholarly journals, and popular religious periodicals. He has written eight books, among which is a two-volume commentary on Isaiah in the New International Commentary on the Old Testament series. His most recent book is a study of 1 John entitled On Being a Christian (Francis Asbury Press, 2008). Dr. Oswalt is an ordained minister in the United Methodist Church, with membership in the Kentucky Annual Conference of that denomination. He has served as part-time pastor to congregations in New England and Kentucky, and is a frequent speaker in conferences, camps and local churches.

Dr. Steve DeNeff is a disciple of Jesus Christ. He earned his Bachelor’s degree and his Master’s degree from Indiana Wesleyan University and has pastored in the Wesleyan Church for over twenty years. He currently serves as senior pastor to the College Wesleyan Church in Marion, Indiana and is a frequent contributor to Wesleyan periodicals. He is author of two books, Whatever Became of Holiness? (Wesley Press, 1996) and More Than Forgiveness (Wesley Press, 2002). Steve has traveled extensively as a speaker to conferences, camps and retreats. He is also active in the training and development of new ministers at various sites, from Michigan to North Carolina. He received an honorary doctorate from Indiana Wesleyan University in April 2003. In his free time, he plays basketball and tennis, and he golfs badly. He is the lucky husband (for over 25 years) of Lori and the father of Nicholas and Ashley. His IPod favorites are ColdPlay; U2; Boston; Eagles; Pink Floyd; Rolling Stones; Steely Dan; REO Speedwagon—and if it will make him seem more spiritual to you: Bill Gaither and Silver Bullet Band!